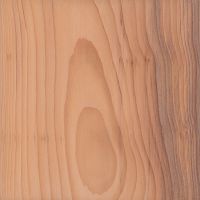 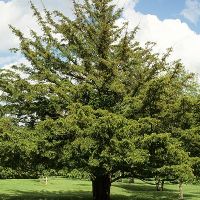 Common yew is reported to be probably the longest living tree in northern Europe. The trees grow extremely slowly and produce exceptionally durable trees that remain standing even when the boles are widely hollowed out. In fact, all the big Yews are reported to have extensive hollowed out trunks. The mature tree attains an average height of about 50 feet and produces a short and deeply fluted trunk.

Sapwood is usually a thin band of pale yellow or tan color, while the heartwood is an orangish brown, sometimes with a darker brown or purplish hue. Color tends to darken with age.

European Yew has a tight grain, a fine texture, and a natural luster. As with all softwoods, the pores are closed. Yew is not commonly available in large or wide boards, and knots and other defects are commonly present, as well as sections with wild or irregular grain.

Overall, an easy wood to work, though knots and other grain irregularities can pose a challenge. Yew glues, finishes, and turns well.

Yew is relatively uncommon, and larger tree trunks are usually hollow. Selection and sizes are somewhat limited, especially since most trunks are also full of knots, resulting in a high waste factor for many projects. Though sections of wood can sometimes be obtained for moderate prices, the overall cost of usable wood tends to be high.