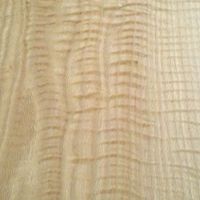 Well-developed wavy grain is extremely rare in Red Oak trees. Wavy grain frequently is called “curly” when waves can be measured in terms of numbers per foot and “fiddleback” when waves are measured in numbers per inch. Wood with curly or fiddleback figure commonly is cut in a manner to display a radial surface, which would be corrugated if the wood had been split. Appearing on smooth surfaces in place of waves are series of alternately bright and dark stripes that shade into one another and produce an illusion of actual waves. Changes in brightness result from differential light reflection. Relatively high absorption by exposed fiber ends produces dark bands; reflection and diffraction from fiber walls cause bright bands. Because the fiber walls are curved sharply and act as concave or convex reflecting surfaces, any change in angle of view or incident light makes the apparent waves seem to shift. Tangential surfaces present much the same appearance. The illusion of undulations, however, results from regular and repeated, parallel, wavy lines that produce an interference pattern on the exposed plane. Actual cause of curly figure is unknown at this time.

Oak wood has good working properties. Curly and other figured woods never like to be planed and always work better with sanders rather than planers. Always move with caution with these woods.

Unique projects or as a substitute for Red Oak.

Rarely seen or available, Less than 1% of Red Oak exhibits curly figure. Premium price for a Oak but reasonable compared to other figured woods.