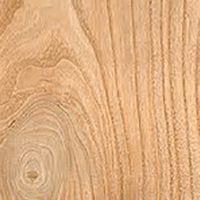 The mature tree has a rounded crown, and is usually 50 to 80 feet high, with a trunk diameter of about 30 inches. The beautiful tree is reported to be planted as an ornamental in several states in the mid-west.

The heartwood is grayish brown in color, occasionally with a lavender tinge, and contrasts sharply with the sapwood. Dark brown or purple streaks, which are often present in the heartwood, give the wood an attractive look.

Grain is typically straight. The wood is reported to exhibit a somewhat racy figure similar to that in Ash on tangential surfaces because of its open pores. The timber is reported to be very stable, and holds its shape very well after seasoning.

Catalpa is reported to work very easily, and is comparable to White pine in softness and ease of working. Although Catalpa is not as dense as some of the timbers favored for turnery work, it is reported to perform well when used for turned articles because of its high stability.

The timber is reported to be limited in quantity since trees are seldom found in pure stands.