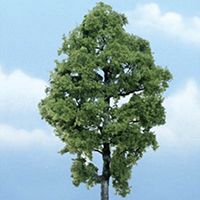 Hickory trees can reach a height of 140 feet, with a diameter of 4 feet.This group can be split into two groups: True Hickories and Pecans, based on micro anatomy.

The sapwood of Hickory is white, tinged with brown. The heartwood is pale to a reddish brown. The grain is usually straight, occasionally wavy, with medium texture. Pores are medium-sized and open.

The wood is known for its strength and shock resistance. It is challenging to dry/season. It is susceptible to bird peck.The wood of pecans is rated slightly below that of true hickories.

Hickory is considered difficult to machine and glue. It rates above average in most working properties, except in shaping. It holds nails well, but it tends to split.

Various species of Hickory & Pecan are typically mixed together and sold as Hickory. Prices are usually in the low to mid-range, depending upon local availability.