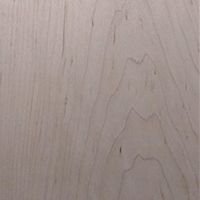 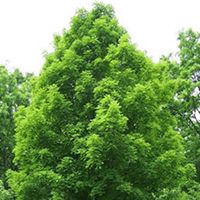 Hard Maple can reach heights of 80-115 feet, with a diameter of 3 feet. In tree form, Hard Maple is usually referred to as Sugar Maple and that is the tree most often tapped for maple syrup.It’s the state tree in four different U.S. states.

Unlike most other hardwoods, the sapwood of Hard Maple lumber is most commonly used rather than its heartwood. Sapwood color ranges from nearly white, to an off-white cream color. It can sometimes have a reddish or golden hue. The heartwood tends to be a darker reddish brown.Hard Maple’s grain is generally straight, but may be wavy. It has a fine and even texture.

Hard Maple is stronger, stiffer, harder and denser than all of the other species of Maple commercially available in lumber form.

Fairly easy to work with both hand and machine tools, though slightly more difficult than Soft Maple due to its higher density. Maple tends to burn when machined with high-speed cutters (routers). It glues and finishes well, though blotches may occur when staining.

Should be moderately priced. Figured pieces such as BirdseyeMaple, curl or quilt are likely to be much more expensive.