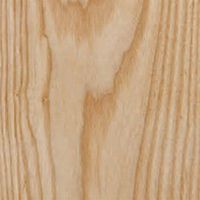 The species is seriously threatened by the emerald ash borer. This exotic insect girdles and kills the tree. For more information refer to http://www.emeraldashborer.info/

The north temperate regions of the globe.

Ashes are trees or shrubs with large, opposite, pinnately compound leaves, which are shed in the fall. The compound leaves have 2 to 11 leaflets. The flowers can be bisexual or there can be distinct male and female flowers on separate trees. The flowers have no petals and the fruits are dry with a flattened wing.

The sapwood of ash is light brown, while the heartwood is brown to grayish brown. White Ash and Oregon ash has lighter heartwood than the other commercial species. The width of the sapwood is 3 to 6 inches. It is ring porous, with the latewood being composed of parenchyma which surrounds and unites the latewood pores in tangential bands. It has no characteristic odor or taste.

It machines well and is better than average in nail and screw holding capacity. It glues moderately well.

Ash is among the least expensive utility hardwoods available domestically.